We are told in the scriptures that God is love, and love does not belong to any particular denomination.
We are living proof of that today.
(Welcome Message from Terry Fancher, President of the MMA.) 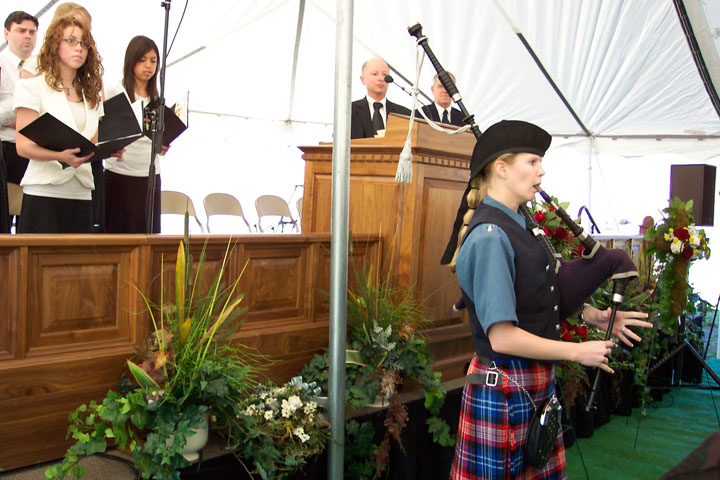 Upon the arrival of the Piper, the Inspiration Choir, led by Director Jeff Elsworth, continued the opening of the
MMA memorial service with a beautiful, and moving, arrangement of Amazing Grace. 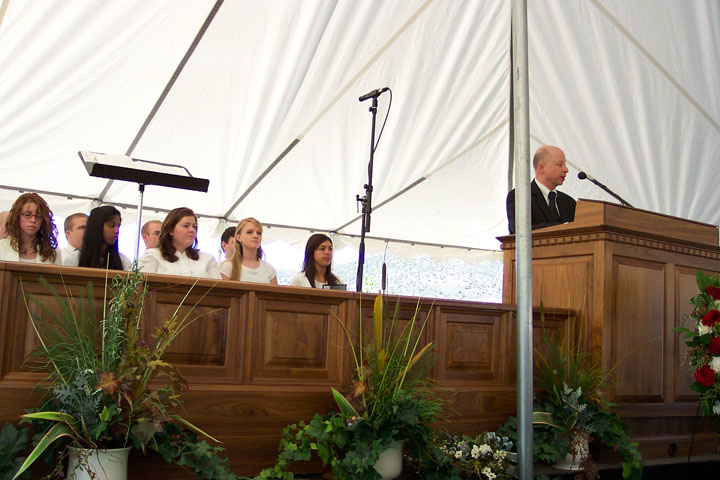 Terry Fancher, President of the MMA, welcomed the audience to the MMA Memorial Service, remembering and
honoring those that died 150 years ago in the 1857 Mountain Meadows Massacre. 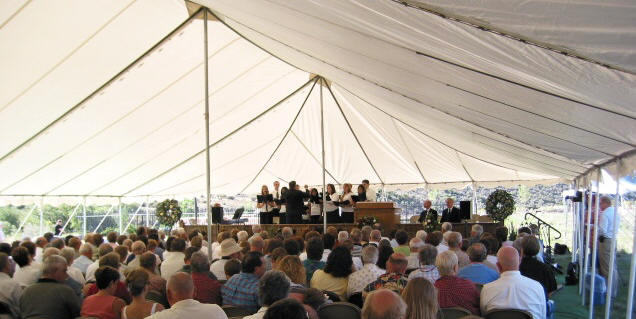 The Inspiration Choir performed four traditional hymns during the MMA Memorial Service.
Play: Rock of Ages    Play: Nearer My God To Thee     Play: Abide With Me    Play: How Great Thou Art
These are not recordings made during the service. 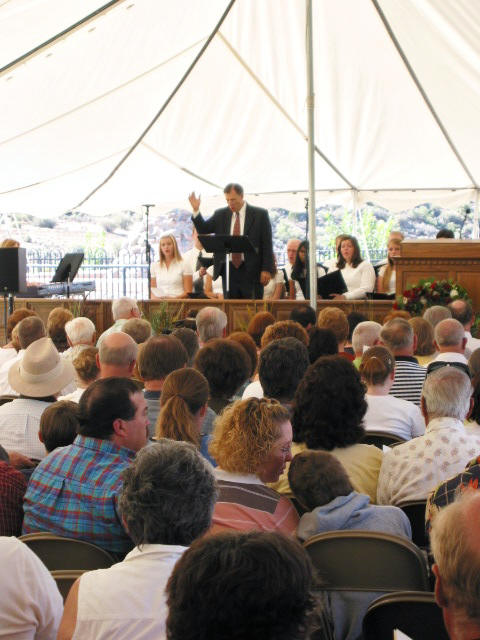 Choir Director Jeff Elsworth leads the audience in a hymn. 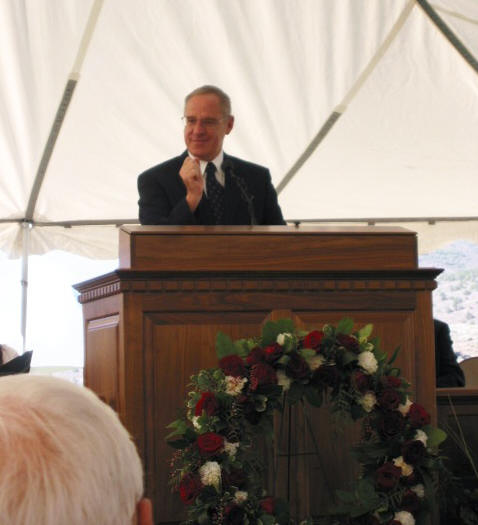 Rev. Buddy Herrington of the Shepherd of the Hills United Methodist Church
Delivers the Inspirational Message at the MMA Memorial Service. 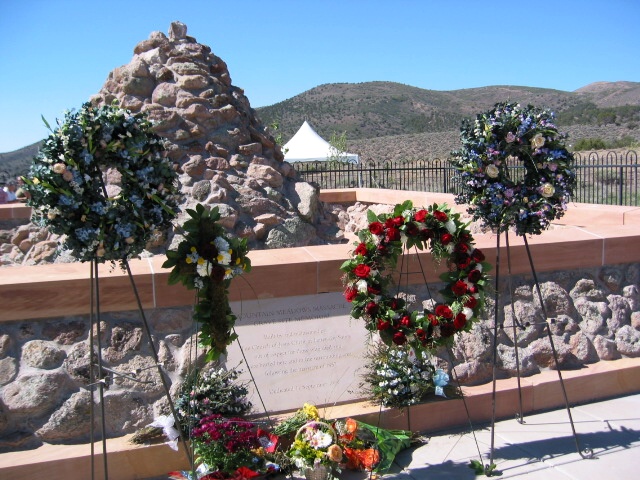 MMA President Terry Fancher read the names of the victims of the Mountain Meadows Massacre, then
the Inspiration Choir sang the hymn Abide With Me as the flowers were placed at the Grave Site in
memory of the victims. Play: Abide With Me 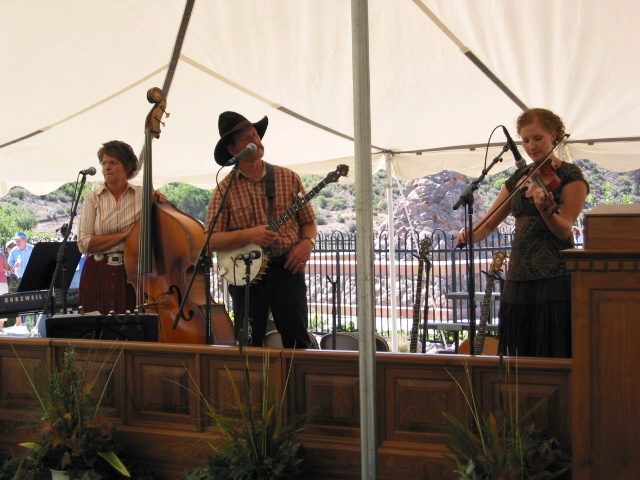 After the Memorial Service, the Blue Sage Trio performed traditional western folk songs that filled
the Meadows with music. Listen to Blue Sage perform: Bury Me Not On The Lone Prairie, Colorado Trail,
Ashoken Farewell, When You and I Were Young Maggie, Fiddle Medley. Listen to more songs, or buy
the Blue Sage Trio's CD "Live At The Junction Theatre" at http://cdbaby.com/cd/bluesageband.
To learn more about the Blue Sage Trio, visit their website. 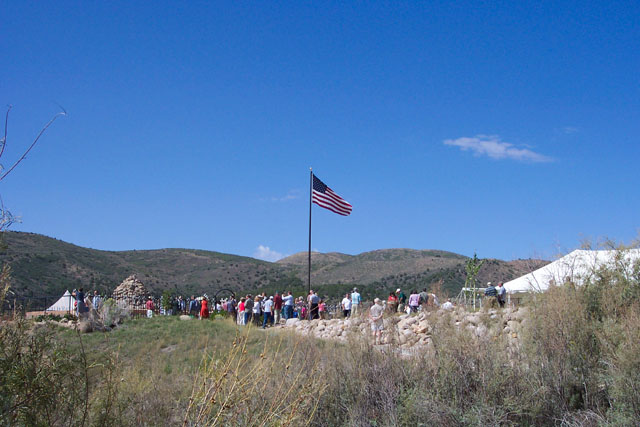 Music floats over the Meadows, as people gather near the Grave Site Memorial after the service. 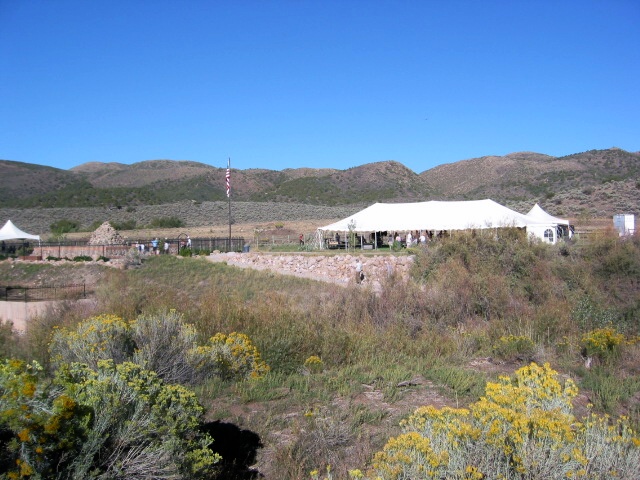 View of the 1999 Monument and the tent where the MMA Memorial Service was held.